Starwood Hotels (a Marriott subsidiary) has revealed that guests have had their personal information exposed in a breach started in 2014 until this past September. According to their statement:

What remains unknown is the identity of the perpetrators and if any guests’ records have been sold or used by any other malicious actors.

The larger problem is that the amount of information available for many guests gives the potential to use to great harm elsewhere, like with creating new lines of credit, or gives insight into the traveling habits of global or business leaders.

Monitor your credit report and look for any suspicious activity. Credit card industry experts recommend freezing your credit so that, if your info was stolen, criminals are unable to open new lines of credit in your name. If you do decide to freeze your credit, you must contact the three major credit bureaus individually. Marriott has sent emails to those affected and has provided guests free enrollment in WebWatcher for a year, they have set up a website for affected guests here: https://answers.kroll.com/.

The popular desktop conferencing software, Zoom, contains a serious vulnerability that could allow a remoter attacker to hijack screen controls and perform actions like kicking attendees out of meetings. In this fashion Zoom could be exploited in three scenarios: More unlikely a current Zoom attendee could cause the exploit, an attacker could take advantage of the vulnerability if on the Local Area Network (LAN), or an attacker, in theory, could remotely attack over Wide Area Network (WAN) could hijack an ongoing Zoom meeting.

The vulnerability itself derives from a flaw within Zoom’s internal messaging pump, a feature that Zoom uses to wait for and send messages in the program. The pump dispatches both client User Datagram Protocol (UDP) and server Transmission Control Protocol (TCP) messages to the same message handler. Given that this process operates in this way, an attacker can potentially create and send a UDP message which would then be interpreted as a known and trusted TCP message used by authorized Zoom servers. Malicious actions caused by the attacker can include hijacking screen controls when a desktop is shared, spoof chat messages impersonating attendees, or kicking and locking out attendees from the conference call.

This also affects both one-on-one (P2P) meetings as well as group meetings streamed through Zoom servers.

Zoom has since patched this issue with Windows and MacOS. However, the problem persists with Ubuntu systems and Zoom is currently working on an update. If for some reason patches cannot be applied, we recommend using other avenues of web conferencing like that of WebEx or Skype.

Q: What Happened to Quora?
A: Data Breach That Affected 100 million users

The question and answer website Quora announced on Monday that as many as 100 million of its users had their data breached by a malicious third party.

Canadian online flower shop, 1-800-Flowers, has been a recent victim of a payment breach from what researches say dates back over four years.

The site’s operating company recently filed a notice with the attorney general’s office in California in compliance with the state’s data breach notification requirements. This comes after the security team found suspicious behavior back in October, and found there had been unauthorized access to payment card data used to make purchases on the Canadian website. This information includes First and last name, payment card number, expiration date, and card security codes.

The company believes that the data exposure had lasted from middle August 2014 until mid-September of this year. There is little information in regards to how the information was being leaked, but researches think that it was a card-skimming malware installed on a misconfigured website which would account for the long window of the breach.

There is also little notice on how many were impacted from this breach, but based on the filings in California which requires notification if over 500 or more are affected, there is a significant amount found to have been breached. A Canadian newspaper has reported that over 75,000 Canadian orders have been involved in the breach. A spokesman for the company has said the issue has affected “a small number of orders.” as the US website was not affected. 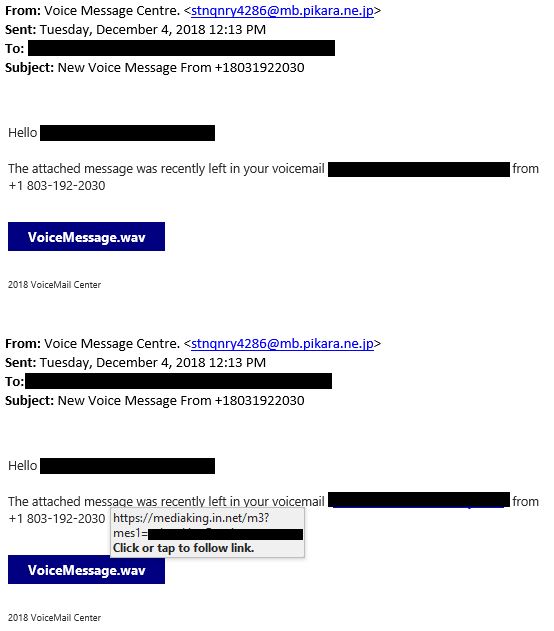 Netizen captures many phishes each month, which we feature here. This week one of our users has received several emails suggesting that an audio message was left in the user’s voicemail, prompting the recipient to click on a file download titled “VoiceMessage.wav”. This email was spammed to the user numerous times. Given the repeated emails as well as the unprofessional appearance, the fact that it is unsolicited, while also containing a top-level domain from Japan (.jp) leads us to believe without a doubt that this is a phishing attempt. It can also be seen that the .wav file is actually a link to a website.