WordPress recently updated to 5.0.1 after a serious number of bugs were reported with the recently released WordPress 5.0. WordPress is an open-source content management system used to create websites such as blogs, media galleries, forums, and online stores using PHP and MySQL. The update addresses several flaws with the initial 5.0 release.

Logitech’s ‘Options’ application, which allows users to customize the functionality and behavior of their mice, keyboards & trackpads, still has a vulnerability that allows an attacker to perform keystroke injection attacks more than three months after being alerted by a bug report from Google’s Project Zero.

Google security researcher Tavis Ormandy first discovered that the app was opening a WebSocket server on user’s machines back in September. The server in question featured support for a number of intrusive commands and used a registry key to auto-start on each system boot. Ormandy detailed how the software bug allowed someone to take control of a user’s system in the report:

“The only ‘authentication’ is that you have to provide a PID [process ID] of a process owned by your user but you get unlimited guesses so you can bruteforce it in microseconds. After that, you can send commands and options, configure the ‘crown’ to send arbitrary keystrokes, etc, etc.,”

Logitech has released two updates to the application since being informed, but it appears that the issue still persists.

If you are using the Logitech Options application, disable it until a fix has been released.

An estimated 78 brands have been impersonated over the last year in what can be described as a well-organized online phishing scheme. Users are tricked into releasing personal information to the threat actor of a malicious website, apparently after winning a prize for answering three questions.

While each phish attempt is tailored to a particular organization, each phish does contain some similarities. For instance, like many phishing emails, they try to rush the user by employing urgent language (“This offer will expire soon!”). They will also try to lace the email with social media profiles for legitimacy; other “winners” of the quiz.

After completion of the quiz, the user is told they will win a prize (plane ticket, gift card, etc.) but they need to divulge some information about themselves and to share the link to the quiz, help to propagate the scam across the internet.

The “Quiz” has also evolved to allow for automatic translation capabilities and the creation of new fake social media profiles. It is likely this method of phishing will be used in the future.

Anything unsolicited should always be suspect, but our phishing recommendations at the bottom of this bulletin highlight ways to recognize and verify scams like this one.

Beware of Threats By E-Mail

In a return to some older tactics and plays, new extortion emails are not threatening your computer data with ransomware, they are threatening you — a new wave of emails playing out which demand payments in bitcoin claim to have planted a bomb in your office or facility.   This may come from a “disgruntled employee” or be a random message.   Other variations are more personal, threatening the use of acid.

Ensure your employees are aware of what to do in case of a bomb or personal threat within your facility, and awareness of these types of threats which while they cannot be ignored completely, do warrant a level of review, especially the more personal threats to ensure the safety of the people. 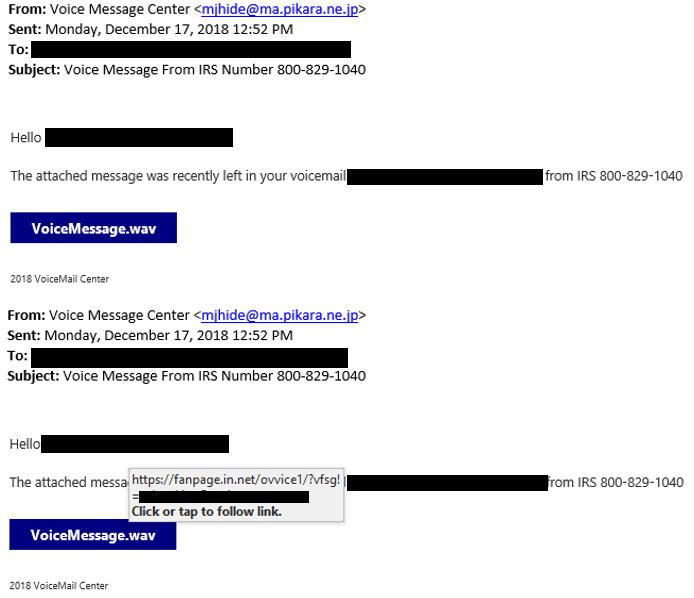 Netizen captures many phishes each month, which we feature here. This week one of our users was sent an email claiming to be from the IRS with an attached voicemail. The “voicemail”, as it turns out, goes to some unknown link. The overall format and sender makes this email less than reputable.